Check your BIGGBY® card!
B Connected

East Lansing, MI, March 14, 2019–BIGGBY® COFFEE is ecstatic to announce that Senator Hertel and the Michigan Senate has enacted a resolution to name March 15 the official BIGGBY® COFFEE Day. Born and bred in Michigan, with over 200 locally owned and operated Michigan locations, and employing thousands of Michigan citizens and dozens of Michigan business, BIGGBY® COFFEE is honored to receive such a praise. 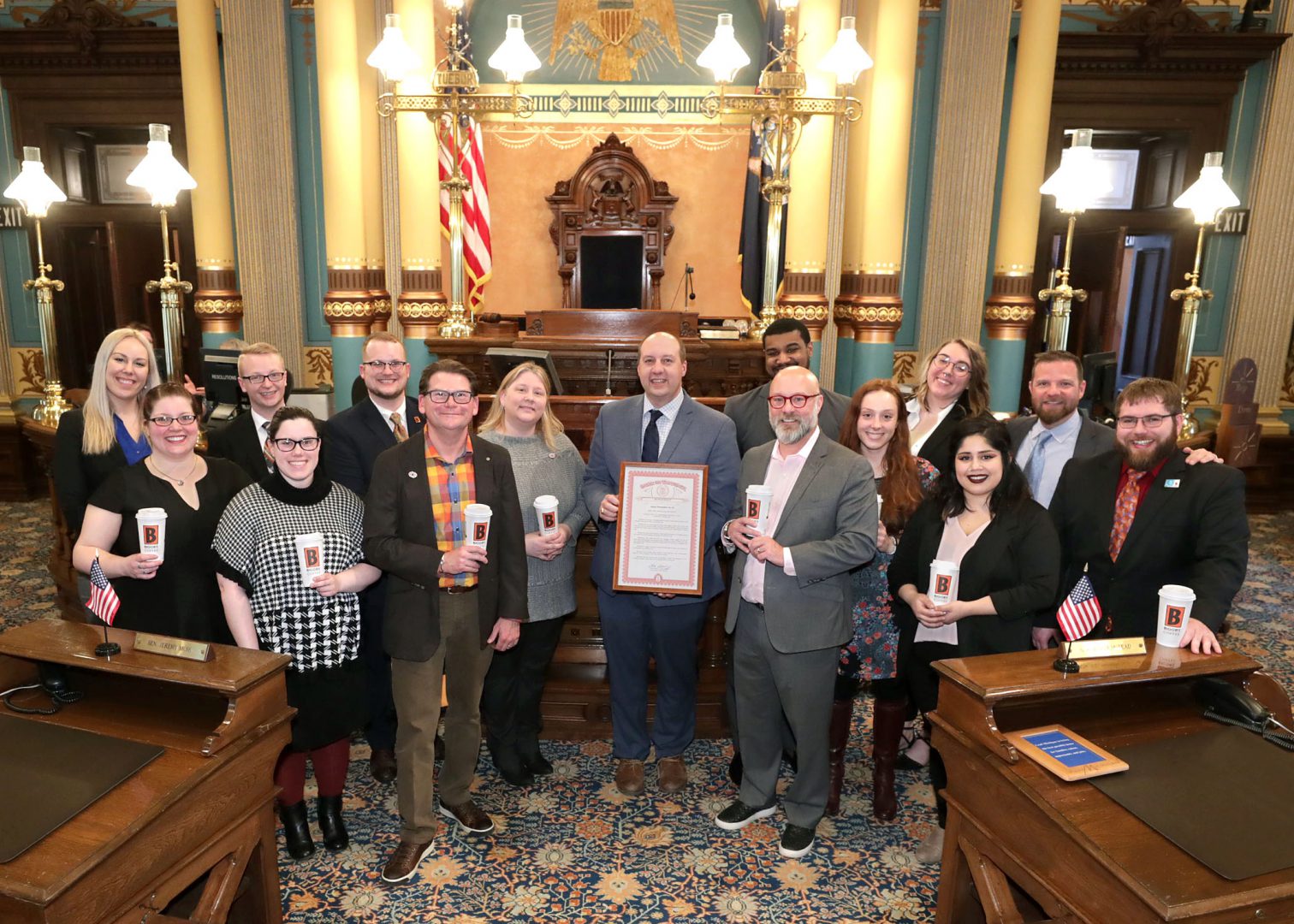 When the first coffee shop opened on March 15, 1995, owner Bob Fish had a dream of bringing specialty coffee to the Lansing area. One year later, on a handshake and $4,000, Fish joined forces with Michael McFall, when they decided to franchise the concept. BIGGBY® COFFEE has steadily grown throughout Michigan since and has built over 200 BIGGBY® COFFEE locations in Michigan owned by more than 100 local community members.

Not only do BIGGBY® COFFEE shops bring a lot of revenue into their communities as well as employ thousands of people throughout the state, but the BIGGBY® COFFEE Home Office makes a concerted effort to establish partnerships with Michigan-based companies whenever they can. One such company is Paramount Coffee, a coffee roaster in Lansing, Michigan, that BIGGBY® COFFEE has partnered with since day one. Every cup of coffee sold in any one of these locally owned and operated coffee shops supports not just the coffee shop, but more than a dozen other Michigan businesses.

BIGGBY® COFFEE is honored to have served coffee at the State Capitol on March 13 when this resolution was passed, and appreciates the State’s desire to support small business owners and the difference they make within their communities. BIGGBY® COFFEE is thrilled to work with the Small Business Association of Michigan (SBAM) to continue to grow Michigan businesses, and is beyond thankful to Senator Hertel and his district for supporting BIGGBY® COFFEE and for recognizing the hard work and dedication BIGGBY® COFFEE baristas, managers, owner/operators, Home Office employees, and partners put into crafting each cup of coffee.

“The BIGGBY® story is one that we at SBAM have followed closely over the years. It’s a shining example of how an entrepreneur can take a dream and build it into a thriving small business.  From joining SBAM in 1995 with one shop in East Lansing to becoming a multi-state franchise with hundreds of store locations, BIGGBY Coffee shows us how and why entrepreneurship should be celebrated and cultivated within Michigan. Congratulations on your success thus far. We anxiously await what’s next,” SBAM CEO Rob Fowler said. 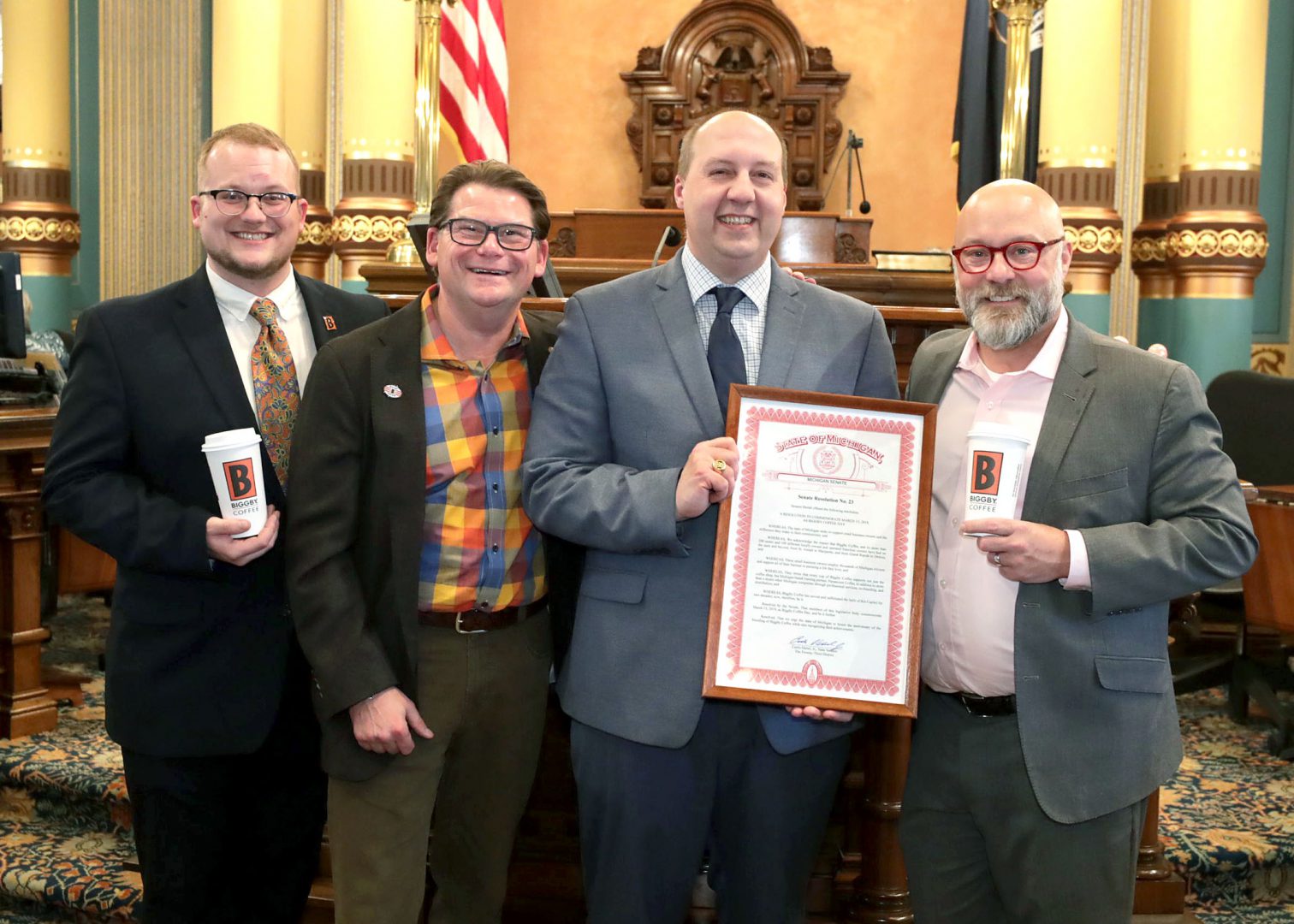 Raise your lattes and celebrate with BIGGBY® COFFEE on this great day as they thank Senator Hertel and the Michigan Senate!

You can view the video of this resolution here.

BIGGBY® COFFEE, East Lansing, Mich.-based, was started with a single store on March 15, 1995. One year later, and on the cusp of opening a second location, Bob Fish and Michael McFall, on a handshake and $4,000, decided to franchise the concept. BIGGBY® COFFEE’s cultural values of Make Friends, Have Fun, B Yourself, and Share Great Coffee help coffee-lovers and the coffee-curious alike benefit from a less pretentious and fun approach to the standard gourmet cafe paradigm. Besides connoisseur-worthy drinks with pronounceable names like Teddy Bear® and Caramel Marvel®, BIGGBY® baristas provide a unique experience focused on brightening their customer’s day and supporting them in building a life they love. The “Big ‘B’” on the orange background caught on, and today BIGGBY® COFFEE has more than 230 cafes across 9 states and counting including Michigan, Ohio, Indiana, Illinois, South Carolina, Wisconsin, Kentucky, Florida, and Texas. In 2018, BIGGBY® launched an Area Representative Program and currently has 8 area representatives in 6 states.

If you would like more information about this topic, please contact Nikki Robertson at 517-980-0995 or email at press@biggby.com.